The Oregon State University cheerleaders are introducing a new move for fans to show off between third and fourth quarters from now on. It's called "The Chainsaw."

While it may be a challenge to try and get fans to learn something new other than the wave and "We Will Rock You," the fact that their new introduction video has garnered more than half-a-million views in just two days might indicate this new dance could catch on. Although, the fact that it's cheerleaders in a video may have more to do with it.

What do you think? 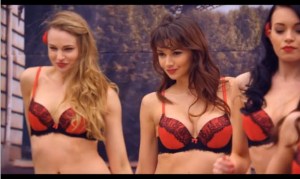 Most European ads are a little more, spicy than the stuff we would see on TV in the states but the new Renault 'Va Va Voom' commercial apparently has pushed the boundaries too far. The commercial begins with a random guy taking the new Renault Clio out for a test drive when the sales rep send him down a different street.