Have you ever wondered if the moon tasted like cheese? Nope, taste like a beer. Houston.... We have booze from Dogfish.

Our friends over at the Dogfish Head Brewery are releasing a new beer called made "Celest-jewel-ale" that's made with crushed dust of lunar meteorites. So this new beer will be made with dust from the moon, how amazing right?

Dogfish Head acquired the rare meteorites, which they then smashed and steeped like a tea in their Oktoberfest brew.

"These certified moon jewels are made up primarily of minerals and salts, yelping the yeast-induced fermentation process and lending this traditional German style a sublet but complex earthiness," Dogfish Head explained about the project."

According to Business Insider, the new ale will only be served at the Dogfish Head brewpub in Rehoboth Beach, Delaware.

Would you drink chunks of the moon? 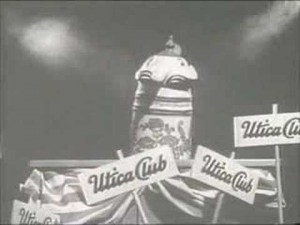 Remember when candidates talked about their great qualities and didn't run a smear campaign? Schultz and Dooley remember. In today's vintage Utica Club commercial we are heading back to 1960, the year Richard Nixon would lose to John F. Kennedy in one of the closest elections in American history.