Remember when candidates talked about their great qualities and didn't run a smear campaign? Schultz and Dooley remember. In today's vintage Utica Club commercial we are heading back to 1960, the year Richard Nixon would lose to John F. Kennedy in one of the closest elections in American history.

In the presidential debates from 1960 Kennedy arrived well trained and well rested from Florida. While Nixon on the other hand was recovering from a knee injury he suffered in a tiresome whistle - stop campaign. Television played a major role for the first time in debates where viewers at home could see their favorite candidate. Nixon looked very run down and fragile, while Kennedy looked like a stronger candidate.

In the end the electoral college awarded the election to Kennedy by a 303 - 219 margin, despite Nixon winning more states than Kennedy. In this next video we can see the Electoral college voting on the world's best beer, Utica Club. 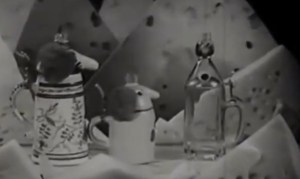 Watch Schultz And Dooley Get Shot Into Space

With the exception of Saturday Morning Cartoons , growing up did not include a whole lot of television watching in my home. But for some reason I would always catch The Schultz and Dooley Commercials. They were great for the time, and people still enjoy watching them today.