As our nation mourns on the loss of American lives in Washington, D.C. on September 16th, still a lot of questions remained unanswered why the shootings took place. Already, only hours after the shooting, conspiracy theories have begun to float around the internet, as they seem to do after every major tragedy. One such conspiracy theory is targeting The Daily Courier of Kelowna, British Columbia.

The paper posted an article covering the events in Washington.

What's raising eye brows of conspiracy theorists is that the article was published and time stamped on September 15th at 11:31PM. The shootings took place in Washington, D.C. on September 16th around 9AM. Was there a goof up in time stamps? Perhaps. The internet is a crazy place. 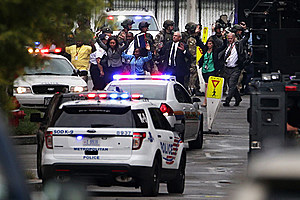 Thirteen people are now confirmed dead, including shooter Aaron Alexis. An alleged second shooter is reportedly still on the loose.

Filed Under: conspiracy theories
Categories: Weird News
Comments
Leave A Comment
Why Do All Of The Good Seats Sell So Fast The Day They Go On Sale?
Chemtrails – Myth Or Malicious? Here Are The Facts
Rick Polito Ghost Writes For George Takei’s Facebook Page?!? Nooooooo!
Top Political Conspiracy Theories Of The Past 100 Years
Woman Who Spent Over $50,000 to Look Like Pamela Anderson Says Women ‘Hate’ Her
Reddit Split After Frustrated Mom Removes Her Teen Son’s Bedroom Door
Yes, Life Might Actually Flash Before Your Eyes When You Die
Internet Tells Married Couple to ‘Sleep in Separate Rooms’ Due to Frustrating Alarm Clock Dispute