Just when you thought sharks were the only thing you had to worry about in the water, now we have to keep an eye on the ducks. 91-year-old Wilmer Neuman learned this the hard way when he was attacked by a Muscovy duck at a local park in Fort Walton Beach Florida last week.

Neumann was injured August 5th when a duck flew after him when he walked down a concrete path at Ferry Park.

The duck flew onto his back, but got a talon caught in his leg on the way down. Neumann told the Daily News on Friday that he reached around and grabbed the duck by the neck, at which point it got its talon out of his leg. He said he thought he may have provoked the duck by walking too slowly. Cheryl Neumann said they took her father to the emergency room Sunday, where he was admitted. He remained hospitalized Tuesday.

“We were concerned that his wounds were not healing at all,” Cheryl said. “They determined that he not only had an infection, but it had gone into his bloodstream. He’s really having a rough time.”

We can’t laugh to hard that a duck attacked this guy because Neumann is a World War II vet who served as a B-24 nose gunner. He was stationed at Eglin Air Force Base three times during his Air Force career. He retired as a senior master sergeant and lives with his daughter in Fort Walton Beach.

The ducks were netted by animal control officers and will be released on a 50-acre property in Holt. Also their wings have been clipped so they cannot return to Ferry Park and attack anyone else. 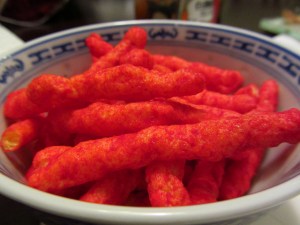 Would You Eat Pepsi Flavored Cheetos?

When it comes to snack foods I usually don't turn down to many choices. However, this gem may be one that has a lot of people thinking "ummmm I'll pass". Introducing Pepsi Flavored Cheetos. Here's more details on the snack, and where to buy them. Pepsi-flavored Cheetos currently can be found on shelves in Japan.