As a kid I remember having a crazy thought once when I rolled up to a stationary basketball just lying there, "I wonder if I can whack this with my front wheel and send it flying..." That thought ended with me on the ground and the ball basically laughing at me so like many thoughts I had during childhood (and adulthood for that matter), I never thought about it again. Until seeing the random sports photo I just happened upon while surfing the net today. Turns out there is an actual sport called 'Cycle-ball' that does exactly what I described above, but with lots more finesse!

The sport is basically soccer on bikes, with two players per team trying to kick the ball into the goal with their front wheels (they can use their heads too). Upon watching the video below, it's actually pretty cool but I'm still going, WTF?. Turns out that this sport has been going on since the 1890's and as evidenced by the picture above has world championships too! The sport is really popular in Europe (that explains it). Check it out!

Next: How About Golfing In The Arctic 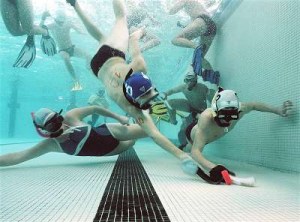 Weird Sports From Around The World

In America, football, baseball, basketball and Nascar rule. You could probably make an argument for hockey and MMA but that's about it. Any sports outside this list are on the fringe a bit. Some of these other sports we consider weird, are pretty common else where's.