Have you ever read the story "The Green Ribbon" from the book called "In A Dark, Dark Room" by Alvin Schwartz? If not, Spoiler alerts ahead.

The story is about a girl named Jenny who always wears a green ribbon around her neck. No matter what time of year, no matter if it matches the outfit she is wearing, Jenny wears a green ribbon. She sleeps with it on, and always wears it. Her boyfriend Alfred, who becomes her future husband, always questions her green ribbon and it isn't until her death that we learn that this Green Ribbon holds her head on her body. When Alfred unties it at the end, he not only commits a form of murder, but he watches horrified as Jenny's head falls to the floor.

So honestly, how in the world did Alfred not know? How did he not pick up on the fact this green ribbon was holding Jenny's head?

Here's a few scenarios where Alfred dropped the ball, and where he should have known the truth.

Also, yes I know this is a children's book, and yes I know it's fake....enjoy the laughs wotcha?

Like every young man, Alfred had to hit puberty at some point, and so did Jenny. Alfred probably had raging hormones like every man on the face of the planet. I'm sure Jenny and Alfred were a classy couple, but I'm sure they got naught behind closed doors. Granted, they are in high school. Alfred should only be aiming for first or second base.

I can picture a perfect scenario... Alfred invites Jenny downstairs to watch a movie. They begin to snuggle, and kiss. At this point full out awkward high school making out takes place..... Didn't Alfred go for her neck? Didn't he aim to leave a little hickey? If we gave her a hickey on the neck, he would have needed to remove the green ribbon around her neck.

When couples meet, they go out on a variety of dates. This can include the movies, going out to dinner, ice skating, bowling, ANYTHING. Now Alfred seems old fashion. He seems that he would like to take Jenny out on an ice skating date. He figures if she falls, he can catch her and become a hero.

Jenny and Alfred head over to the rink. They skate, Jenny falls and lands on her butt. The force of the fall would have been felt throughout her spine. If her head was only holding on by a string/ribbon, why didn't it just pop right off?

Everyone eats. Everyone needs to drink. I'd imagine with a huge gaping hole around Jenny's neck, she must leak. After taking a chug of soda, didn't a little coke spill out? Didn't the green ribbon stain? Picture this.... Chili. Did Jenny never have gas and burp? Clearly her neck wasn't secured like our plumbing at home. Her neck had to leak, it's just science.

4) On Trips To The Beach

Everyone goes to the beach. Didn't Alfred plan a romantic day at the beach? Didn't Jenny and Alfred go swimming? Was the ribbon completely opaque? Or was the ribbon see through like a wet t-shirt. At no point did the ribbon get wet and Alfred could take a peak and see a huge Frankenstein like line in her neck? Also, wouldn't Jenny's head flop off under water?

5) When Jenny Got Into The Shower

Let's face it, we all poop, and we all shower. At some point Jenny would have to shower. Whether or not Alfred was around, Jenny got into the tub. This ribbon would have to get wet on a daily basis for around 70 years. After you use a towel more than a few times it starts to smell. This ribbon would have to just smell terrible after touching water so many times. Also, wouldn't the color would have faded after a short period. Did Alfred not notice any of this? Did he not pick up on any smell from her ribbon, or her open neck? Did he not see her naked in the shower and wonder "Why is she wearing a green ribbon in the shower?". Speaking of being naked.....

6) When Alfred and Jenny Went To The Bedroom

What happens on your wedding night? You know what I'm talking about..... you know. Don't pretend you don't catch my drift. Now if Alfred and Jenny were a modern couple, chances are they had sex before marriage. If this was the case, didn't Alfred ever wonder why Jenny wouldn't completely strip down? At what point was Alfred ok with the green ribbon in the bedroom? It wasn't like it was sexy lingerie.... It's a ribbon.

Let's face it... Alfred let it slide once. He didn't care if she wore the green ribbon. He let it slide twice, three times, four, five...... 900. Now men and women answer this..... If your love one was wearing a green ribbon every time you entered the bedroom, wouldn't you question it? Seriously, wouldn't you just stop?

Alfred must have been into weird stuff like that.

Clearly Alfred was a little mentally unstable. How could you marry someone and not know that her head is held up by a green ribbon? 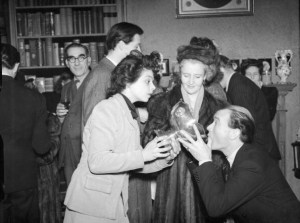 Filed Under: halloween, humor
Categories: This And That
Comments
Leave A Comment
Watch Sweet 8-Year-Old Trick or Treater in NY Refill Empty Candy Bowl From His Bag
Wanna Play a Game? Try Picking Best Halloween Costume in CNY
Three Things To Do With Pumpkins After Halloween
Is Trick-Or-Treating on Halloween Turning Into A Political Battle?
Upstate NY’s Most Popular Costumes Might Surprise You
No Tricks! Central New York Schools Cancel Halloween Costumes
This Former Upstate New York Asylum Is Considered One of the Scariest Places in the World
“Hocus Pocus Family Fun” Day in Sylvan Beach
All Treats, No Tricks! Halloween Freebies, Deals and Specials at CNY Restaurants